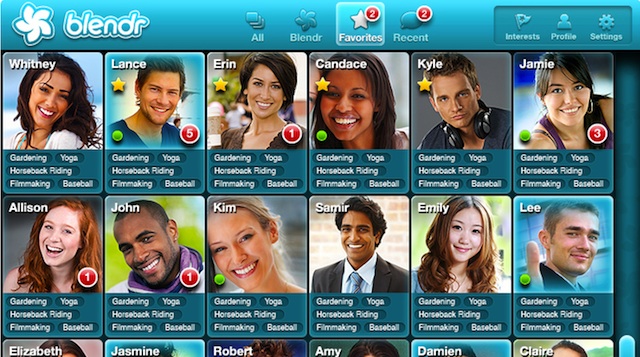 After years of hearing their gay friends rave about the mobile, GPS-enabled hook-up app Grindr, straights finally have their own version, released today. It’s called Blendr, and it’s a horrible idea. Blendr’s main problem is that it is being marketed primarily as about making friends, not love. The app lets you find people in your general vicinity with shared interests, so you can have a pleasant conversation with a stranger about, say, French literature, whenever you want. “Facebook does a great job keeping you connected with people you already know,” Grindr CEO Joel Simkhai told The Daily Beast, “but how do you meet new people? How do you make new friendships?” How do you make new friendships? I don’t know, through work? Drunken conversation in the fried chicken joint at 4am? Gradual accretion through natural social interaction? Certainly not through an iphone app! Of course, Simkhai has also been trying to pass off the insane fantasy that guys on Grindr are simply after “platonic relationships.” True, in the sense that Plato fucked men. No doubt, the tamer tone of Blendr is meant to address differences between straight and gay dating culture. But it’s still going to totally alienate the impulsive, horny straight people, which we hear do exist outside of reality TV, and who realistically will be the only ones who might find a use for what amounts to a GPS-coordinated flesh finder. Grindr works because it is a sex buffet—Yelp for penises. Hell, even Republican senators show up on there, naked, bent-over in all their human glory. And in fact Grindr is such a source of entertainment that even straight people can get into it for the sheer voyeuristic thrill of it. But the straight version is an electronic knitting circle you can keep in your pocket? How wholesome! How boring. It seems the straight hook-up technological revolution might be doomed to end with the introduction of attractive-friend-of-a-friend Facebook stalking.

So this new app pinpoints your exact location and shows you everyone else in your vicinity who has the same program on their phone. Sounds just a little sketchy. I don’t need to be walking home from the bar at 4am and get jumped by some gay creeper dude who’s been hanging out in Central Park all night and knows where my exact location is. This app is great for rapists and pervs who are looking for an easy target and makes me wonder why people would actually think this is a great idea. Stay tuned for future horror stories and lawsuits when bodies start turning up all over!