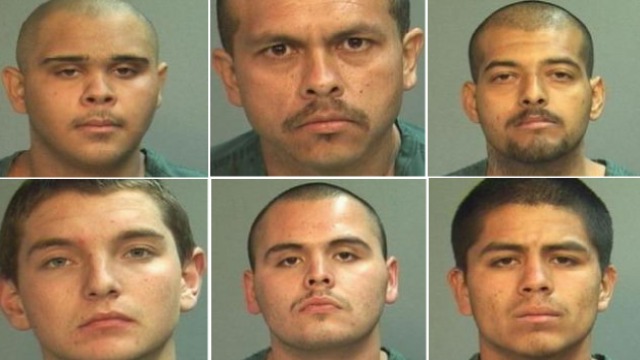 SANTA ANA – A group of men and women are suspected of taking over a 62-year-old man’s apartment for more than a week as they used the residence for parties, drugs and other illicit activities while the man lived in fear, police said. Officers responded about 5 a.m. Friday to requests for a welfare check on a man living in an apartment complex in the 3300 block of West Camille Street. A neighbor reported that several suspected gang members had forced their way into the man’s apartment and stayed there for more than a week, Santa Ana police Cpl. Anthony Bertagna said. The man, who authorities identified as a veteran who suffers from post-traumatic stress disorder, was reportedly afraid to leave his residence. Police found six men and two female juveniles at the residence, all of whom were arrested. Investigators allege that Andrew Perez, 19, was the ringleader of the group. They didn’t appear to have any previous relationship or friendship with the victim, police said. People were going in and out of the man’s apartment all week, Bertagna said, forcing the victim into his bedroom at the end of the evenings as they partied in the rest of the residence. While the victim wasn’t physically injured, his apartment was wrecked, Bertagna said. Police are working with veteran’s groups and the social services department to get him assistance.

So these clown dicks forced their way into this guy’s house and partied for a week and he never called police? If there were ever a case of Stockholm Syndrome, this is definitely the time for it. ‘Oh you want me to chug a 40 oz. of Old English and blow a line off that chick’s ass? OK, but just please don’t hurt me.’ Even though this sounds like the plot to some bad Pauly Shore movie, the other thing I’m curious about is how it took a week for neighbors to realize a full on raging party was going on in a 62-year-old’s apartment. ‘Wow, Gene’s really livin’ it up down there this week, huh Martha? Do ya think we should check on him?’ ‘No, I’m sure he’s just got some company over to watch the game.’ ‘Yea you’re probably right. Oh, look at that there’s a young man licking whip cream off a girl’s breasts.’