FoodBeast: It’s called Beer Pong Master, and it’s made by the dudes at Bay Tek Games, the same dudes who put similar, less booze-themed machines in your local kid-friendly arcades (think about the games you see at Chuck E. Cheese’s). We spotted a couple of these rogue machines at last week’s Nightclub & Bar Show in Las Vegas, and to our surprise, people were too consumed with generic booth babes and free alcohol samples to notice (hell, we almost missed it too). Before we knew it, we had spent 10x longer at this booth than any other, asking questions like, “Is this going to be available at Dave & Buster’s? Can we have one of these in our office? Damn, this is intuitive, but how do we drink?” The game worked super well, and was surprisingly a great deal of fun to play. It’s all very fluid — swipe a credit card or insert a coin, pick 1 – 4 players, and be on your way. Normal beer pong mechanics are in play here, but you have a set amount of time (our machine was registered at 60-second games) to sink as many balls in the still-lit cups as possible. All 10 cups begin completely lit at the start of the timer, and once your first ball connects to the rim of any cup, the clock begins winding down until you’ve sunk a ball in every cup and dimmed all the lights, or 60 seconds has passed, whichever comes first. While there is no drinking directly tied to the game (the cups are empty), the booth operator was touting the many different ways patrons and bar owners could tie drinking benefits to the machine. Of those ways included setting particular in-game scores to beat and rewarding patrons with free pitchers of beer. Another way of drinking involved participants bringing a pint of beer to the game, and drinking beside their opponent — every made cup by your opponent is a 1-second chug of beer for themselves. The machine is set to start distributing immediately, and will be in locations as soon as proprietors make the leap to try it out in their establishments. Let’s hope it’s sooner rather than later!

Love that they called it beer pong and not Beirut. Pretty sure New England is the only weird place in the world who calls it that. First off, I’m not digging the how close the back of the game is to the cups. A miss is a miss and a shot shouldn’t count because it hit off the backboard and fell in. Next, the challenge of bouncing has always been to catch your opponent off guard or distract them so they can’t block your bounce for 2 cups. Who is blocking the bounce in this game? You just get a freebee bounce WITH a backboard?? Bullshit. Last, what about the one in 500,000 shot that lands between 3 cups? In my house each cup the ball is touching is taken away. Is the game taking that into consideration? Or what about you and your partner making the same cup in consecutive shots? That’s a ‘get off my fuckin table’ according to how I play. I’m assuming that doesn’t apply here. Overall, I think we’re halfway there. Of course it doesn’t beat playing with cheap beer in your own basement but for sanitary reasons at a bar, I’d say this might actually work. New rules pending. 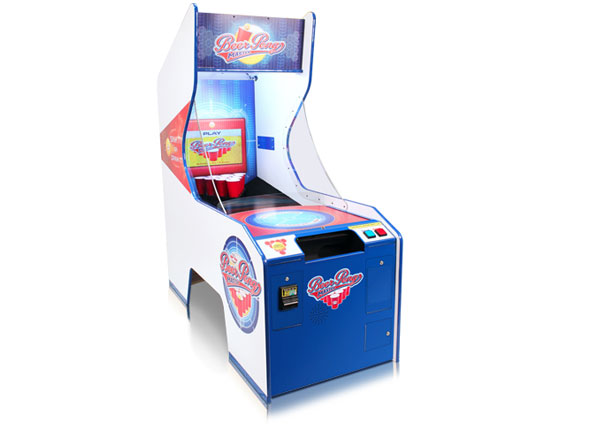