So Anthony Weiner (NY Mayor candidate/Twitter sexter) took the train this morning in an effort to prove that he’s just as normal as everyone else. How convenient that he missed the AM rush hour where people’s asses and sweaty pits are crammed in your face while the 4-piece mariachi band plays like it’s Cinco de Mayo in the middle of the train. Does this shit really work with voters? He’s gonna get back into the exact same Lincoln Towncar that dropped him off at the subway as soon as he gets to his destination. Bloomberg tries this every once in a while after a terror threat or storm shuts down the city. Like you take the subway one time a year when you’re running for office to show you’re an Average Joe and sit there having a conversation with a guy who probably has no idea who you are. You think he wants to be bothered while he’s trying to read the paper? If it were me I would pull my earphone out and tell him the same thing I tell the inner city kids trying to sell me 2-year old candy…beat it!

Now if voting for mayor depended on subway riding, here’s my vote: 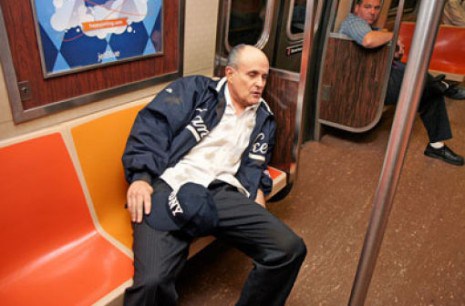