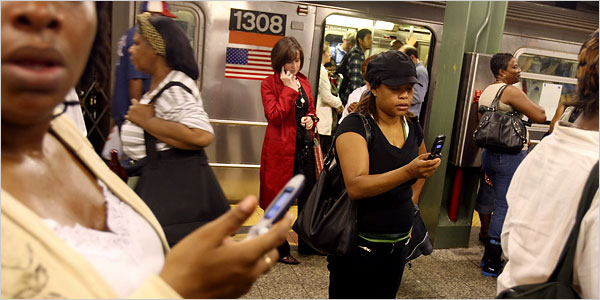 Cnet – New Yorkers will finally be able to use their cell phones in subway stations–as long as their commute takes them through one neighborhood in Manhattan. The New York Times reported yesterday that cellular service will come to four stations starting Tuesday. AT&T and T-Mobile customers will be able to make phone calls, send text messages, and browse the Internet on their phone underground–something that’s virtually impossible today. The deployment is extremely limited: only four stations in the Chelsea neighborhood on the west side of Manhattan. The initial launch, which acts as a pilot program for a wider rollout of service across the New York subway system, will occur at the C and E platforms at 23rd Street and Eighth Avenue; the A, C, E and L platforms on 14th Street and Eight Avenue; the F, M, and L platforms at the Avenue of the Americas and 14th Street; and the 1, 2 and 3 platforms at the Seventh Avenue station, also on 14th Street. Verizon Wireless and Sprint Nextel customers won’t be able to get the service.

Not sure how I feel about this one. Yea it will be great to have internet and text while waiting for the train but it’s only in a couple of stations. The monthly unlimited MetroCard is currently $104 and why do I have the feeling this will bump it up once again? I’ll sacrifice using my phone for the 30 minutes I’m in the subway to keep transportation prices down. But this is all minor compared to the biggest problem I have with it. Last thing I want to listen to is people on their goddamn phones on the train! It’s bad enough with the panhandlers and performances that I have to deal with on a daily basis but now I’m going to have to listen to loud ass fuckers yelling in their phones? Is the MTA really trying to open Pandoras Box here? What is the benefit? Just the other day I saw a black woman publicly disciplining her children on the subway and making a scene. She also pulled the ol’ ‘wait til I tell your father about this.’ Now if this bitch had a phone that worked on the train, the show would have gone on and everyone would have to hear it. Thanks but no thanks MTA!