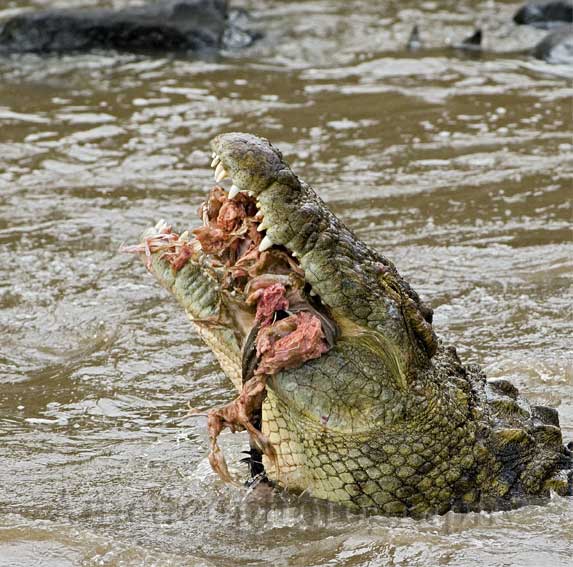 A 70-year-old man from Zimbabwe narrowly escaped a crocodile attack as he crossed the Chivake River with his pants off — but he lost part of his testicles and suffered a few broken bones in the melee. Jonah Maturure told the Sunday News that he’d taken off his trousers and put them in a tomato box above his head before he crossed the river. He’d crossed the same spot in the same river several times before, but this time, a giant croc was waiting for him. “I was not suspecting anything … But when I was almost in the middle of the river I was attacked,” he told the news website. “It mauled a chunk of my buttocks before attacking my manhood, tearing my testicles into shreds. The skin covering my manhood was partly torn but I quickly put my thumb in its mouth … It then grabbed my hand and I could hear my bones cracking.” Realizing that he wasn’t going to save his personal possessions, he threw his tomato box in the river, The Sun reported. That move may have saved his life. The beast loosened its death grip and swam straight for the tomato box. Maturure escaped, bleeding profusely from his nethers, and ran to a nearby house for help. The battle was just one of a string of crocodile attacks recently in Gutu, an area with a spread-out population of just 78 people per mile.

Wouldn’t wanna live through this. That’s all I was thinking while reading this. But hey, you cross a murky river with no pants on just dangling your dick in a croc’s face, you get what you deserve, right?

No way in fuckin’ hell I would cross a river in Zimbabwe, pants or not. I’ve watched way too much Planet Earth to know better than that. Croc’s are just the beginning of what would swallow your dick whole. Piranhas, snakes, and hippos are all on the list of animals that would love to just rip your manhood off and not even think twice about it. If I watched a croc eat my balls off and feed them to it’s young, I would swim over and let it finish the job. No point in living after that but something tells me Jonah will be taking the long way around the river next time.