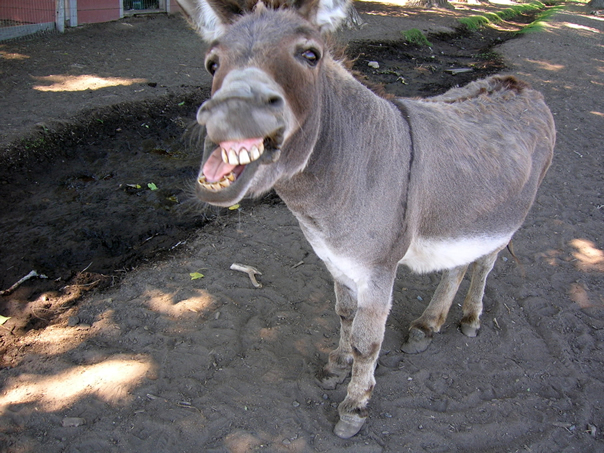 A man caught having sex with a donkey told a court in Zimbabwe the animal was actually a prostitute who turned into a donkey in the night. Sunday Moyo, 28, was found by police officers performing a sex act on the donkey, who was lying on the ground tied to a tree, just after 4:00am local time, a court in Zvishavane, about 185 miles (300 kilometers) south of the capital Harare, heard. He was arrested Monday in the Mandava township of Zvishavane and charged with bestiality, the New Zimbabwe newspaper reported. Admitting the crime, Moyo told the court, “Your worship, I only came to know that I was being intimate with a donkey when I got arrested. I had hired a prostitute and paid US$20 for the service at Down Town night club, and I don’t know how she then became a donkey.” He also claimed he was in love with the animal, telling the court, “I think I am also a donkey. I do not know what happened when I left the bar, but I am seriously in love with [the] donkey,” The Herald newspaper reported. Moyo was remanded in custody until Oct. 27 and will be examined by two government psychiatrists.

Wow what a day for blogging in the sex world. Was it a full moon last night or did I miss some weird sex holiday? We got pervs making out with cardboard cutouts, naked chicks running down highways, and now Moyo here got caught banging a donkey that he swears started out as a prostitute he picked up at a night club. Now this might be an ignorant question but where the hell are there night clubs in Zimbabwe? When I think of Zimbabwe I think The Lion King and I’m pretty sure other than that crazy monkey tree, there were no night clubs in that movie.

Moyo here clearly had the ultimate beer goggles on the night before. He actually mistook a donkey for a decent looking hooker only to wake up and find out he had his dick in a different kind of ass. But now the worst part is that he’s in love with the donkey. Common mistake Moyo. You never fall in love when you have to pay for the sex and $20 at that! You can’t turn a donkey into a housewife so get over it and move on.