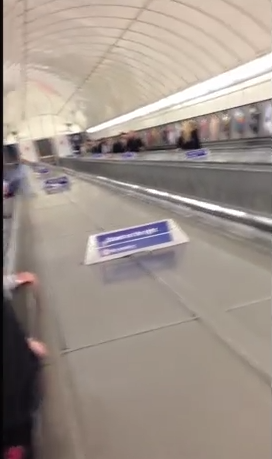 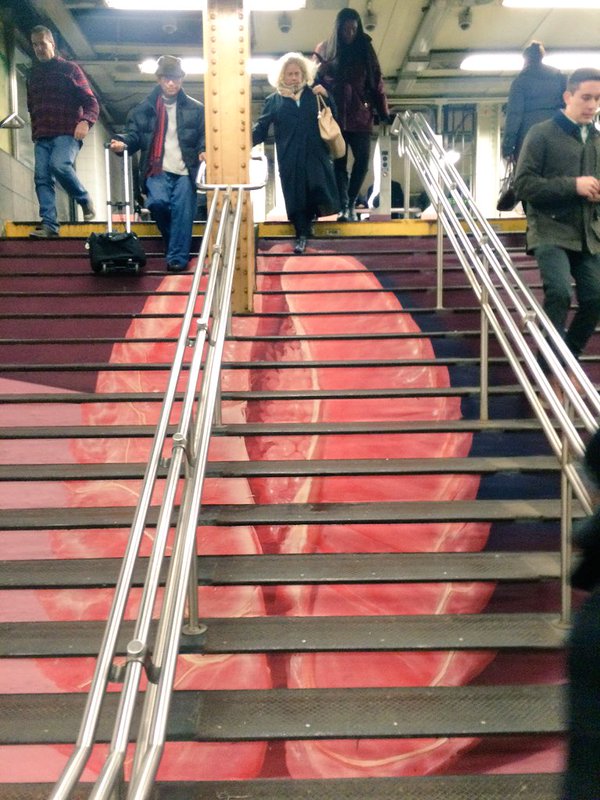 Mic.com: Roughly half of the human population menstruates at some point in their lives. Women know this. Men know this. And yet, few talk about it openly. From an early age, we’re taught that periods are disgraceful and dirty, leaving women feeling embarrassed and alone. That’s one reason why Thinx, a menstrual underwear company “committed to breaking the taboo around menstruation,” decided to propose a provocative new advertising campaign for the New York City subway, which acknowledges upfront how frequently periods are shrouded in silence and shame. According to Thinx co-founder and CEO Miki Agrawal, the campaign pushes the envelope with purpose, relying on suggestive imagery as a way to start a conversation about menstruation stigma. One of the ads shows a photo of a cracked egg, an allusion to the unfertilized eggs expelled during menstruation. Another features a woman in a tank top and underwear, next to a picture of a grapefruit.

“If you look, it could potentially be a vagina, but it’s clearly a grapefruit,” Agrawal told Mic.

That apparently didn’t matter, however, to the gatekeepers who reportedly objected to Thinx’s proposal — not only because of the innuendo in the ads, but allegedly because they also contained the word “period.”

Link to rest of article…

So somehow a rat activates an iPhone camera and takes a selfie on an unsuspecting, sleeping man in the subway. Do we believe it? Probably not because Jimmy Kimmel has ruined everything for us.

-Thanks to Mike for this

Remember that first time you got drunk and someone passed you a blunt and against your better judgement you hit it? 5 minutes later you get the spins and you’re talking like this guy? I don’t really either. Just like hopefully this guy doesn’t remember this. Keep it at home people!

All I could think of while watching this was that scene from Talladega Nights when Ricky Bobby tells everyone to keep eating while he sucks face with his smoking hot wife. Awkward City.

Yea, he’s bat shit crazy but at the same time entertaining the hell out of himself. It takes a special person to be able to do that on the NYC subway! Even though it probably doesn’t make sense, I’d love to know what the story is.

If this was NY there would probably be a homeless guy laying across those reserved seats. The only subway etiquette people seem to sometimes abide by here is ‘keep your head down and mouth shut.’ And as I say that I realize that rarely happens too. Nevermind.

Just another reason why that ’10 hours of a girl walking around NYC’ is bullshit. This chick was wearing nothing but a painted g-string and only a couple people noticed. She even walked down a flight of stairs in Times Square right in front of a bunch of dudes and didn’t get a look. And how about the balls on this guy, huh?! 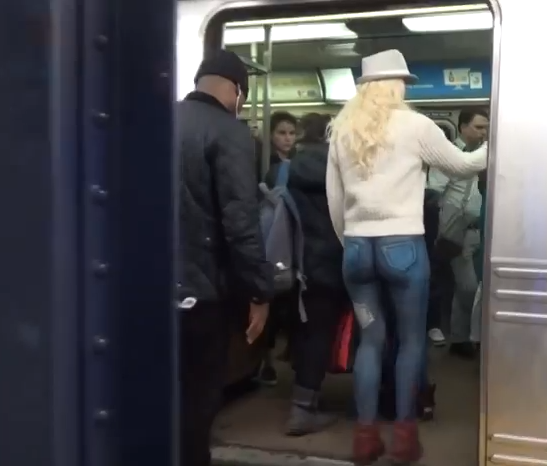