A topless, drunken woman led police on a car chase along route 422 at speeds of up to 128mph before surrendering to officers. Erin B. Holdsworth, 28, of Hiram, Ohio, was found to be wearing only fishnet stockings, a g-string and high heels when she was arrested in Auburn Township. Officers used stingers along the highway to disable two of Holdsworth’s tires and she was forced to pull over on the side of the road a short time later. When they approached her vehicle, the nearly-naked woman got out and staggered across the road before she was handcuffed. She has been charged with operating a vehicle impaired (OVI), refusing a blood alcohol test, fleeing and eluding, criminal damage, driving under a suspended licence, speeding and reckless operation at Chardon Municipal Court. Chief Jon Bokovitz, of the Bainbridge Police Department, said Holdsworth was taken to a Geauga County Safety Center after her arrest on October 11, before she was released pending the charges, Fox News reported.

Thank you Ohio, just another gem to add to your resume. Topless, in a g-string, and wearing sneakers sounds pretty close to most girls Halloween costumes and with Halloween right around the corner are we sure blondie wasn’t coming from a costume party? And how classy was she in that cop car? Tattoos up her legs and screaming in some devilish tone. Love this move right here: 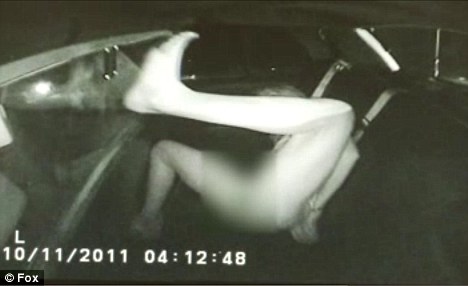 Speaking of Halloween, hope to see people at the Westside Beer Garden on Saturday night on 33rd and 8th. Free admission before 10PM and $10 after that. Costumes a must and password is ‘beaver’. Can’t make this shit up!