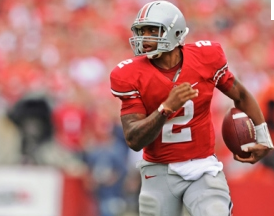 Kids across America that are soon starting another school year, let us give you a quick tip; Do Not, I repeat, DO NOT cheat off of any kids whose fathers may play for the Oakland Raiders, because doing so will keep you in 3rd grade for years to come.

Reports have been surfacing today that the Oakland Raiders rookie Quarterback, Terrelle Pryor , scored a 7 on his Wonderlic IQ Test.  That’s 7 out of 50…or 14% for you math nerds out there.

NFL teams IDEALLY want their QB to score around 21 on this test (aka be smarter than a piece of cow dung).  The highest score of an active QB in the league belongs to the Buffalo Bills Ryan Fitzpatrick (GO BILLS!).  Fitz scored a 48 on the test in only 9 minutes.  But I guess you can say he cheated because he did play his college ball at Harvard, and wasn’t involved in some very bad off-the-field decision making that made him leave school early, ahem Pryor

Now does having a horrible score translate into a shitty NFL career?  I don’t think there is an answer to that, but if your reading this blog on the toilet(and just smiled bc you really are), take a courtesy flush and read more about the correlation in this Sport’s Journal article.

Update: Here is an exclusive video of Pryor’s reaction to his test scores: