Gawker: A freelance photographer working for the New York Post on an unrelated assignment happened to be standing on the 49th Street station platform when 58-year-old Queens resident Ki Suk Han was suddenly pushed onto the tracks by an as-yet-unidentified assailant. The photographer, R. Umar Abbasi, snapped at least two photos of Han before he was run over by the downtown Q train. The married father-of-one sustained critical injuries and was later pronounced dead at Roosevelt Hospital. One of the haunting photos Abbasi took graces the front page of the Post this morning, incurring the ire of readers who want to know why no help was extended to the injured Han in lieu of capturing the moment for posterity. Abbasi claims that he was using his camera’s flash to warn the train’s conductor, possibly suggesting that the photos were incidental. The Post further defends Abbasi, saying he wasn’t strong enough to lift Han off the tracks.

Here is the fight moments before the accident: 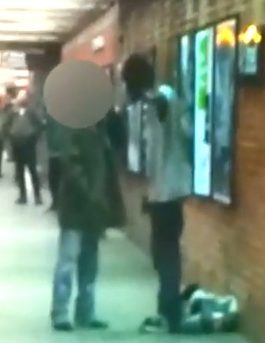 Nothing like waking up and grabbing a paper to see Glenn from The Walking Dead about to get lit up by an incoming Q train. I have a feeling that Umar Abbasi was trying to alert the conductor as much as the 9/11 terrorists were trying to safely land those planes, but that’s just me. Gotta love New Yorkers though, right? Guy falls onto the tracks and everyone pulls out their iPhones to snap pictures like Asians in Times Square. Ki Suk Han may not have been saved but at least there will be enough pictures to create a flip book of the entire incident. And I don’t know what the pre-push argument was over, but no one deserves to be pushed onto the subway tracks…with a train coming…at 25 MPH…weighing a cajillion tons.

When you troll as hard as this sidewalk sleeper, I would consider getting knocked out a moral victory. If that’s the least that happened to him screaming the N word in a black guy’s face on the subway in Queens, then he should count his blessings. He’ll still wake up homeless but he’ll still be alive. On second thought maybe a quick death was what he was going for.