This is some Final Destination kind of shit, huh? Stroller just takes off on its own and ends up on the train tracks. Luckily, a woman was able to save the kid but now they get to look forward to Death chasing them down the rest of their life.

This is why I always cab it when I’m drunk. I just wanna get home to my bed and not have to worry about pissing in the subway or falling onto the tracks. Dude is lucky a train wasn’t coming and that people were around to throw his ass back onto the platform.

And how about this guy jumping over the third rail 4 times?! I think he’s more lucky to be alive than the guy who fell.

So there’s a new documentary on HBO called SUPERHEROES about morons who literally dress up and “protect” the streets of the cities they live in. Just like Jersey Shore, I couldn’t stop watching it even though it was the most ridiculous shit to ever take place in America (I say that loosely). Literally, gay crime fighters walking the streets like hookers on a Saturday night trying to bait people into rape, skateboarding at 4 am in Brooklyn, etc. etc. All the while local police laughing at them in their face. I must say though, my favorite by far was Master Legend: 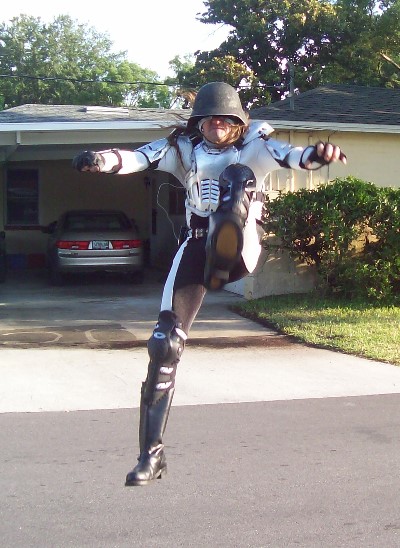 ML drinks on the job, hits on chicks at bars, and carries an ice cube launcher. Not only does he NEED his own show, but I want to know how he has time to save the world in between crushing all the local pussy in downtown Orlando, FL. I don’t mean to get so side tracked but there’s a point to this. Master Legend must have been on vacation in Spain and saved this dude’s life on the tracks cause look at how calm and cool that guy is. Drunk dude knocked out on tracks? I got this. Train coming? Don’t rush me. Get the guy to safety? Done and done. I know I always say this but it seriously looks like a clip from a Hollywood movie. And if you ever come across Master Legend, he probably just saved your life and you didn’t even know it.