In case the video gets pulled down CLICK HERE

By now I’m already sick of seeing the Miguel Leg Drop so I’m not even going to bother posting it. Besides, this is way better anyway. I’m pretty sure stunt crews from Hollywood couldn’t pull off a jump more spectacular than this. The pure physics of that van getting that much height and distance through the air is mind boggling. Happy Monday!

A dog rescued from an icy pond in the US may be put down after it bit a news anchor during a live television interview. Kyle Dyer was rushed to hospital after being bitten by Max, an Argentine Mastiff, on a Colorado’s 9NEWS morning program on Wednesday morning. Max was on the show after being pulled from a freezing reservoir by a firefighter on Tuesday after it fell through the ice while chasing a coyote. Dyer suffering bite wounds to her face and is in a “fair condition” at Denver Health Medical Centre. “I just adore dogs, but I’m especially happy to meet you after your story yesterday,” Dyer said to the mastiff as she patted him during the interview. “You’re gorgeous.” As the interview ended Dyer leaned in towards Max in a show of affection but the dog bared its teeth and snapped at the news anchor before owner Michael Robinson was able to restrain it.  Max’s owner will be cited for leash law violations, not having control of the dog and not vaccinating it for rabies. The animal is not showing signs of rabies but may be put down anyway.

This is the side of those obnoxious ASPCA commercials they don’t show you. You try to pet the dog and it decides to bite your face off. Shoulda left it in the frozen water cause now it’s right to the gas chamber right after the show. Love the reactions from everyone in the studio though. Trying to stay professional while this chicks lip hangs off her face like she had a stroke. Since the firefighters don’t budge from their seats, let’s kick it over to Gary for weather! 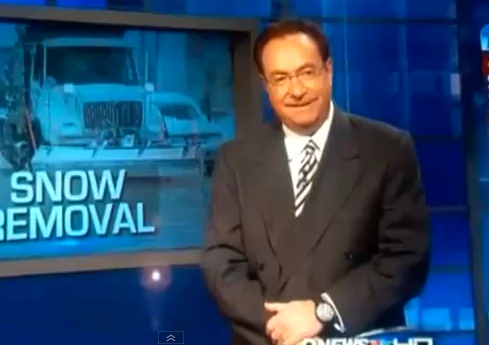 “OK…alright…OK.” Nice save Gary! Next time try not to react like you just walked in on your parents having sex.

HuffPost: This past weekend, New York City’s subway system experienced four deaths in less than 24 hours. The Associated Press reports that all of the incidents took place on Saturday, and police say none of the victims were related. The first death occurred on Saturday morning at 2:01 a.m. at an R train station in Elmhurst, Queens. According to The Wall Street Journal, the victim is believed to have fallen down the stairs. The AP adds that he was reportedly in his 60s. About six hours later, the AP reports that a man in his 20s was struck and killed by an L train on 14th Street in Manhattan. Daily Intel adds that he was standing on the tracks between 3rd Avenue and Union Square. The Wall Street Journal identified the victim as Brian O’Mara of Garden City, N.Y., and put his time of death at 8:25 a.m. The third fatality occurred on the A line Saturday afternoon in Brooklyn at the Nostrand Avenue station. The Wall Street Journal writes that a little after 4 p.m., an MTA employee spotted a body on the tracks within the subway tunnel. On Saturday evening, the fourth death took place on the L line in Manhattan. The New York Daily News reports that at about 10 p.m., a man’s head was spotted between a subway car and platform within the Sixth Avenue station.

So apparently Death was in town riding the subways on Saturday and just leaving bodies all over the place like it was Jonestown. Is that a rat at the end of the platform? No, looks more like a human head. Oh, ok. Sounds like some Final Destination kind of shit and wherever that 5th victim is who made it out alive, you don’t have very long before you cross the street and get crushed by a garbage truck.

See, it’s funny cause she’s OK. Hunny, you’re crossing a highway in Russia. That tip toeing shit isn’t going to fly, especially when the chances of all of the motorists being drunk are pretty high. But I must commend her. She hit the windshield, flipped, landed on her head and still dusted her coat off, collected her bags, and got on with her day. One tough bitch! Russians I tell ya. Something else running through their veins over there.

No real sense of urgency over in Poland huh? Does shit like this happen every day? Did you not see everyone calmly get up and meander over to the guy who just tried to blow his head off? That whole area of countries over there scares the shit out of me. They just seem cold and emotionless. How much must it suck when you can’t even kill yourself the right way? If this guy’s life didn’t suck in the first place, he will now be eating through a straw and breathing through a tube for the rest of his life.

Erin Laung Worth’s bungee cord snapped during her 350-foot jump over the Zambezi River in Africa. The Aussie tourist somehow survived the fall as well as the “croc-infested waters.”

Everyone always asks me ‘why don’t you live a little and do something like skydiving or bungee jumping.’ Well first off I’m horrified of heights but also sometimes when you skydive, the chute doesn’t open and sometimes when you bungee jump, the cord breaks after a 350 foot fall and you smack into crocodile infested water. Now luckily this chick survived somehow but you’ll never see me doing this. If I wanted to thrill seek I would go out to a bar in Harlem, get wasted, and try to find my way home walking. I like my odds better there.

Side Note: This video kind of reminded me of Indiana Jones: Temple of Doom

So there’s a new documentary on HBO called SUPERHEROES about morons who literally dress up and “protect” the streets of the cities they live in. Just like Jersey Shore, I couldn’t stop watching it even though it was the most ridiculous shit to ever take place in America (I say that loosely). Literally, gay crime fighters walking the streets like hookers on a Saturday night trying to bait people into rape, skateboarding at 4 am in Brooklyn, etc. etc. All the while local police laughing at them in their face. I must say though, my favorite by far was Master Legend:

ML drinks on the job, hits on chicks at bars, and carries an ice cube launcher. Not only does he NEED his own show, but I want to know how he has time to save the world in between crushing all the local pussy in downtown Orlando, FL. I don’t mean to get so side tracked but there’s a point to this. Master Legend must have been on vacation in Spain and saved this dude’s life on the tracks cause look at how calm and cool that guy is. Drunk dude knocked out on tracks? I got this. Train coming? Don’t rush me. Get the guy to safety? Done and done. I know I always say this but it seriously looks like a clip from a Hollywood movie. And if you ever come across Master Legend, he probably just saved your life and you didn’t even know it.

So here’s the story. This guy was wasted in the subway and began pissing off the platform when he lost his balance and landed head first on the rail. Drunk and semi unconscious, these 3 bystanders did NOTHING to help him. I’ll say right off the bat, not for the faint of heart. Now a survey came out not too long ago saying that New Yorkers were the most likely to take action if they saw something happen or had to save someone. So much for that. This asshole just stands there and watches as his girlfriend cries and this very, very, very, very intoxicated guy bleeds all over the subway. The dick, however, DID have the decency to give play-by-play and film at the same time. “Yo, you alright man?” Does he look alright?! He’s a pillow away from a good night’s sleep. Bleeding from the ears and barely moving and you’re going to ask him if he’s alright? “Yo, real time. This is how niggas do. 13 minutes til the next L train comes.” Oh great! So now we have a countdown going until this video turns into a “Faces of Death.”

I’m not going to analyze all 3 of these videos because I apparently have earthquakes to deal with in NY, but I hope Roofio here understands that karma is a bitch and when he falls onto the tracks and reaches up for help, I’ll be standing there with my middle finger out. When this kid sobers up in a week, he better name his first child after that MTA employee. He is the REAL hero and had to take care of the situation on his own thanks to these clown dicks. If those assholes even TRY to take credit for being heroes, I might have to track them down.

On a side-note, what is the policy on Asians using “nigga”? Has it now come down to Whites being the only ones who can’t say that?